The public meeting was held this past Wednesday evening at Harvey Milk Academy. The meeting also serves as the annual business meeting when eligible board members and officers are elected. 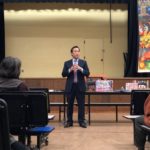 First on the agenda after introductions was Assemblyman David Chiu. Assemblyman Chiu thanked the EVNA members for our work, and he shared highlights of what’s new in the state legislature, including some of the intense fights with Washington over sanctuary policies, immigrants rights, and even the new federal tax deduction limitations . Other priorities for Mr. Chiu include housing, transit oriented development, and clearing the back log of unprocessed rape kits .  A Q&A session followed and included questions regarding conservatorship law changes, modifications to Costa-Hawkins, global warming, and state level programs to assist cities with the growing challenges dealing with the mentally ill and homeless.

David’s presentation was followed by District 8 Supervisor Rafael Mandelman. Supv. Mandelman talked about his work to date in City Hall.  About 1/3 of the issues brought to him involve citizens dealing with people living on our streets.

Rafael let attendees know the palm trees were trimmed on Market Street, and additional news about street trees- his goal is to expand our city's green canopy. He has been working to help small businesses located in buildings that need seismic retrofitting, and possible zoning changes to make it easier for small businesses and restaurants to open in the Upper Market neighborhood commercial district. The Q&A that followed included questions about vacancy taxes, more about the perplexing challenges of empty retail space, and the proposed micro-hotel on 18th street.

Next up was Jody Schwartz, executive director of Lyric, Jodi shared Lyric’s mission, programs, and accomplishments.

EVNA secretary Leila Decker then announced the results of the annual election.  A quorum for the election was met per the EVNA bylaws.  All of those running for a board or officer position were elected. Congratulations to our new Vice President, Alex Lemberg, and treasurer Kevin Cureton and welcome aboard to new board members.  The newly elected board members and officers take over their duties on January 1, 2019 for two year terms.

EVNA President Mark McHale concluded the meeting by encouraging the members to use the 311 App, and ended with an open forum for attendees to bring up issues important to them.

The next general meeting is on Wednesday, January 23, 2019 at 7pm, also at the Harvey Milk Academy.