Was that last meeting was a DISASTER, or what?? Yup, just like we planned- it all came off without a hitch.  Kudos to our board members for getting into the spirit and making the meeting fun and a great success.  Those hardhats and emergency vests were a nice touch. Not only did we have an outstanding attendance (52 souls), considering we changed the date AND the location on everyone for this one meeting, but the speakers all showed up and made really engaging presentations, all having to do with disaster preparedness. Especially informative were Zoe and Ellen's from Civic Edge team telling us about the differing plans to retrofit the seawall along the Embarcadero, and Sean Gallardo, our Eureka Valley NERT representative, breaking the attendees into small groups and coming up with supply lists suitable for home evacuations, go-bags, first aid kits, and earthquake drills. The drawing at the end of the meeting was a lot of fun and a real hit- congrats to the winners, Luke, Terry and Chris for having the lucky tickets! 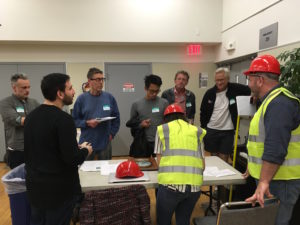 The board also made good progress on our membership drive- in June, after an audit showing a high number of expired memberships, we set a goal to get people renewed and non-members signed up for the fist time. While the numbers will be revealed in the Treasurer's Report this coming week, it looks like we increased the roll by a dozen dues paying members! Many thanks to those who signed up and renewed, it's a pleasure to have you on board!

This month, we will continue to focus on membership drives, as we begin to discuss two important issues: volunteer opportunities this fall, and a call for candidates to run in the next election at November's meeting. Stay tuned for details to come!

See you at the next General Meeting, when we'll be back at Harvey Milk Academy in the Cafeteria: